There is progress.  The tartan is coming along.  The first picture I showed you implied that more was woven than had been woven; that is, the cloth just went around the breast beam at the front of the loom but now it is much farther along and headed toward the cloth storage beam at the back of the loom.  Not quite a yard yet but close: 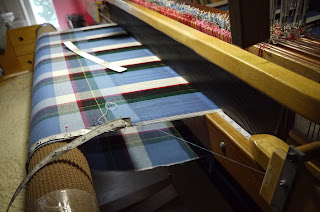 If you look closely (or click on the picture for a closer look) you can see a narrow strip of heavy cardstock on which I have marked the color sequence using colored pencils.  I use that strip to be sure that the plaid is truly woven to square.  I have used this method for decades now to be sure that plaids can be sewn without problems matching at seams.

There is progress in the garden, too.  Yesterday afternoon, when the light wasn't good enough for a photo, I noticed that one of the early daffodils was nearly ready to open.  You can imagine my surprise this morning when instead of just one, I saw this: 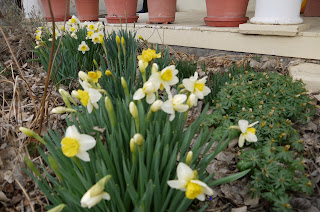 It was a warm night and that was all it took.  Now, it will be warm tonight, too, they say, before the storm blows in tomorrow with lots of rain which will turn to snow.  These sweet flower faces are likely to be plastered to the ground by heavy snow.  If that happens, I will rescue some to enjoy on my kitchen table. 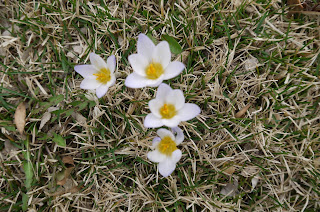 Along with the daffodils, there are new things blooming, more tiny, early bulbs:﻿
This is blue pearl crocus, an extremely early variety and quite small (less than an inch across).  The trace of blue is on the outside of their petals.
Additionally, I noticed another early arriva (pushkinia or striped squill): 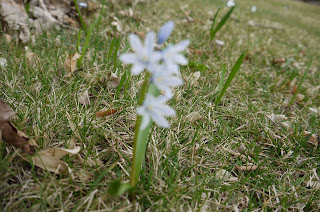 It's pretty breezy outside right now so they are very slightly out of focus.  What appears to be pale blue petals are actually white with a narrow blue line that leads to the tiny, pale yellow cup where the pollen is.  Seen under ultrviolet light the blue line is very bright and is sometimes called a pollen guide.  I think of it as landing lights for bees so that the can see right where to go.  Unlike us, bees see into the ultraviolet.  For two or three years after I first planted them, I thought the petals were pale blue--until I took a closer look.  This little plant convinced me to look more closely ALL the time!
Posted by Sharon at 1:36 PM