It has continued to be very hot here, hotter than normal, and very dry.  Most of Utah is going up in flames.  Besides being hot with very low humidity (8 to 10%) we are experiencing brisk winds.  All in all, it is a firefighters worst nightmare.

I live in the city and am pretty safe but the trees, plants, animals and structures that have been lost are many.  So far only two human deaths have been reported, but that's two too many.

Meanwhile I have been keeping the lawn mowed, the gardens watered, picking raspberries and making jam: 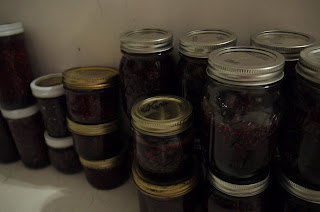 It makes sense to stay inside, out of the sun and heat, when possible and of course, I have done that, too.  The new hemp warp is well under way.  Here is the fifth towel (third pattern): 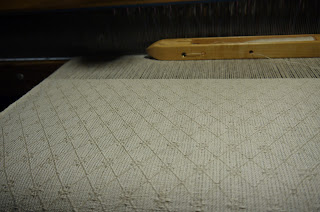 And of course no matter where I go, I am accompanied by my sweet companion, Bob: 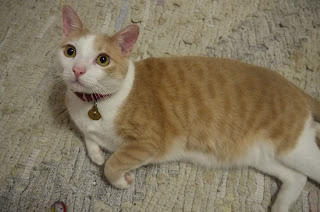 I am eager to begin working on the reproduction of the radio grille cloth, but have to clear the loom first.  The threads for this cloth are all very small and will be a challenge.  I know I can do it, though.
Posted by Sharon at 7:35 PM No comments:

I've been working steadily and have things to show for it.  First, the hemp towels are woven, finished and ready to go to good homes.  I will keep one of them but that leaves six.  Here they are: 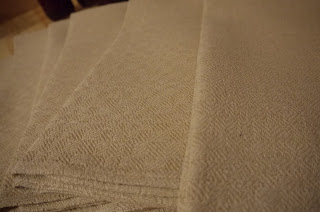 I am so pleased with the hemp yarn that I have beamed and nearly finished threading a second warp of towels.  Instead of threading a twill block pattern, I am threading the new ones into a fancy pattern, using 16 shafts.  You'll see them later.

Raspberry season is on here.  That means that every other day I need to pick raspberries and then make jam.  Yesterday I picked for several hours and made several batches.  The temperature got to 101 (Farenheit) which meant it wasn't pure joy picking them.  The humidity was just 5% and it was windy, to boot, which helped me a little bit but made the work of firefighters who are battling wild fires south and a little west of here very difficult.

There is something very satisfying about looking at jars of richly colored jam lined up on the table: 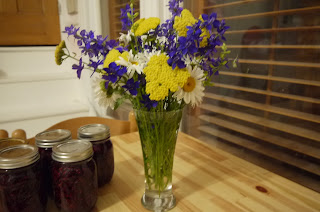 The entire picture, then, makes me feel as though I have accomplished a lot, even with the heat we are experiencing: 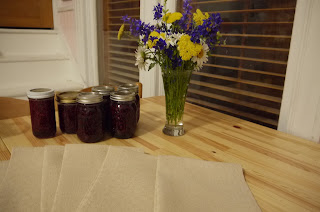 It's summer as the ripening raspberries attest, and I have a bouquet of Shasta daisies, larkspur and achillea (a variety called Moonglow) for my kitchen table.  None of the flowers are fragrant, which is too bad, but they are a treat to my eyes, nonetheless.

I hope to finish threading the towels tomorrow and also go shopping for the tiny threads I am going to weave into grille cloth for a 1930 radio for a man who restores them.  The threads are tiny, black in the warp direction, and sett quite closely.  Finding the coppery-looking threads that run in the weft direction may be challenging, but what's life without challenges?
(Boring, I suspect.)

Where have I been?  Here in Salt Lake City, mainly.  How have I been?
As my father would have said "as busy as an ant on a hot rock".  Yes, scurrying and getting things done.

When I wrote here last I was headed to the Art Ball at the  Springville  Museum of Art.  It is a formal affair that takes place every year shortly after the annual Spring Salon opens there.  I drove down that Saturday evening and mingled with the folks at the Ball and a while after I got there my friend, Lee Benion, also arrived.  Lee is a painter (that's sort of like saying Isaac Stern is a violinist) and a dear friend.  [She also makes Mom's Stuff a salve that smells of pinyon pine and works wonders. www.momsstuffsalve.com]  There was a light buffet and then the awards ceremony.  Lee got a cash prize; I got to stand up and be recognized.  Still, out of about 1000 entries, 224 were accepted and mine was the only fiber piece.  There were a handful of photos, fewer sculptures and just one fiber piece.

I had a student here in my studio which meant finishing something on the loom and dressing it for her use and tidying up after myself.  I had been keeping my head down and working hard and tidying was needed.

In between I have been cutting the lawn, weeding, nurturing my vegetable garden, doing laundry, volunteering at the nursing facility, exercising  and spending one whole weekend volunteering at a festival in the heart of downtown.

Right now I am waiting to hear whether I have the go ahead on a project reproducing the grille cloth for some radios built in 1930.  I have done the analysis of the teeny, tiny black and gold fabrics so I am ready.

I have wound a warp using a fine hemp yarn, the first I have ever purchased.  It is 16/2 so is pretty fine and a light tan color.  It's nice stuff and I put on enough for six or seven large towels woven in a two block twill.  Here is how they look on the loom: 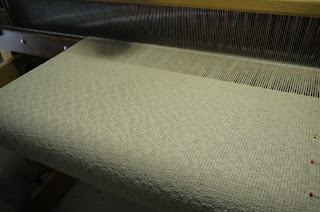 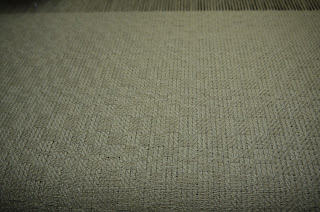 I'm hoping that the pattern shows up a little better in the lower photo.  The twill blocks form circles (almost) over and over again across and down the cloth.  I am weaving the fourth towel now and really want to see how they look after being washed and ironed well.  The warp is sleyed 4/dent but vigorous washing ought to even things out.  I believe that they will be very absorbent and perhaps rival the linen towels I have made and use with pleasure daily.

The raspberries are starting to ripen.  I had enough for a generous serving over my morning cottage cheese for two days now and took a close look while mowing in the back garden.  I might be able to make a jar or two of raspberry jam in the next day or so.   Oh, boy!
Posted by Sharon at 7:34 PM 1 comment: