More of the same, sort of

I am still weaving the grill cloth.  Does this look familiar? 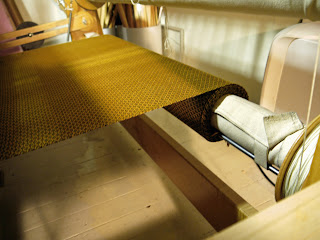 No, it isn't the same photo from a few days past.  On about Thanksgiving Day I realized that there was one dent that had been double-sleyed (actually 4 ends) that didn't particularly show up from the wrong side that I see as I weave.  But, from the other side is is too apparent for my taste.  Arghh!  I blame the cataracts....
So I cut off what I had woven (37 feet) and worked on correcting the flaw.  What you see here is the new cloth since I cut off the first part.  I am only about 25 feet in right now but I have conferred with the company in Arizona and with their approval shipped the first piece to them today.
Other than weave this cloth, not much else is going on.  Except, the extracurricular activity now is shovelling snow instead of raking and gathering up leaves.  I have done it four times since I last wrote here.  It has been very cold so the snow is light and easy to shovel even when it is a foot deep as it was on Sunday afternoon.  After continuing to snow there was another ten inches at my house the next morning.  The skiers are ecstatic.
Tonight we are to have more but it has warmed up a bit so it may turn to rain down here on the valley floor by tomorrow morning.  Snow Monday, Wednesday and more is due this weekend.: it's beginning to look a lot like winter.
I did a flock of errands (six stops in all) on Saturday so that cat food and weaver food have been laid in and I can work and work without having to bother to go out.  Tonight's dinner was turkey soup using the broth from boiling the stripped bones of the turkey plus the drippings from the roasting pan.  With the addition of fingerling potatoes, most of the dark meat from the turkey and halved brussels sprouts it is tasty.  Good thing, too, because I will be eating it for a while!
So life goes on and I am beginning to feel like the pink bunny in the battery advertisement.  Going on and on and on.
Posted by Sharon at 8:38 PM 1 comment:

Do you see what I see?

Do you see what I see?  Progress. 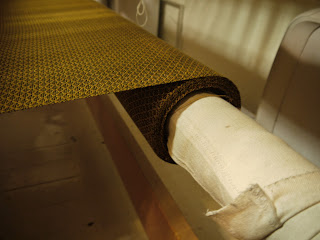 When you weave the same thing all day, every day, the days seem to slip past almost without notice.  Granted, I do laundry, prepare and eat my meals, rake and gather leaves and go to my exercise class,  bathe and sleep, but other than that all I do is weave the grill cloth for antique Philco radios, early and late.

I am finally starting to rack up yardage but am still far less than halfway through the warp.  Considering that it is 46 yards long and grows at the rate of about 48 picks per inch, it's a lot of shuttle throwing.  I am so grateful for my library's supply of unabridged recorded books!  I'd be bonkers without them, I think. 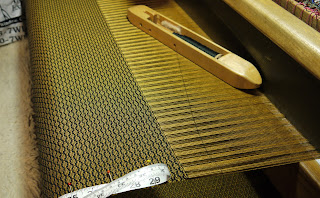 This is the cloth from the side (wrong side up) and the next photo shows the cloth (right side up) as it goes to the cloth storage beam.  If you look closely you can see a little shadow that shows that the woven cloth goes around that beam far more
than once.  The cloth is relatively thin, so you see several layers there.  (Thank goodness!) 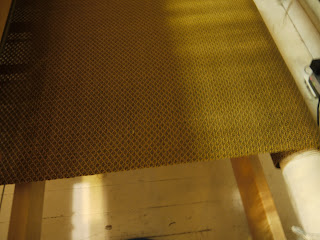 ﻿Perhaps my computer will be more cooperative later so check back to see the photo I have tried and tried to insert here.  I need to get back to the loom!

As you can see, completely re-booting my computer has made it possible to get this photo.  Now, back to the loom....
Posted by Sharon at 7:11 PM No comments:

The radio grill cloth is underway at last.  It's puzzling to me that it took so long to wind, beam, thread and sley this warp.  Granted, it is long and there are close to 40 ends per inch, still it seems to me that it ought not to have taken many days.

I had trouble with  sleying the reed.  There were errors that I had to find and correct and often they were close to the middle of the width of the warp so that I had to re-sley most of it.  It was disappointing when I created another error as I worked to correct one.  I wonder if the cataracts that are developing have something do do with that.  At any rate, this is what it looks like on the loom: 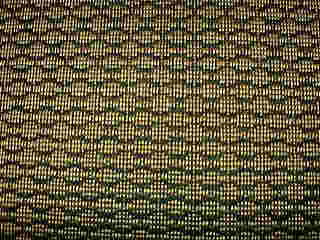 The gold color looks a little pale here but I am using a energy-saving light bulb that tends to wash out the color when used at night, particularly yellows through orange.  The light color here is a vibrant gold.  I am weaving the cloth wrong side up.  The gold is dominant on the other (right) side.

The weaving is going well although it will take a long time to weave it all.  The weft is 20/2 black cotton so there are lots of picks per inch.

Meanwhile, the snow we were to have had on Tuesday did not materialize.  It has been cold and the days are getting shorter.  Daylight Saving Time ended last Sunday which was a relief.  Now the sun comes up at a reasonable hour so that it isn't dark at seven in the morning.  I don't mind going onto Daylight Saving Time in the spring but now that it has been extended into November, it feels excessive.

The leaves are falling from my big, old cottonwood tree.  It's the oldest tree (nearly 152 years) in the Salt Lake Valley and very big.  I have had it trimmed so that its big branches don't extend as far but it still drops leaves over almost two months.  It began in late October and won't finish until the first or second week in December.  I can completely clear all the leaves and when I wake up in the morning it looks as though no one has ever raked them up.  The good thing is that the ones I have gathered won't have to be raked and gathered again.  Tomorrow I have a lot of leaves to clear and put into my yard waste can.  They may not all fit.

What have I been doing?

Just about everything.  I removed the last, and heaviest, window a/c unit and then put up the storm windows.  Some of them are over six feet tall and require a ladder to get up to where they fasten at the top so it is sweaty palms work.  I've mowed the lawn and gathered all the fallen leaves--only to have the lawn covered the next morning!  It's that time of year and the huge cottonwood in front of my house drops a LOT of leaves.  Don't misunderstand, I love this tree, but it is a lot of work.

I have been working at the warp for the grill cloth, too, of course.  I am currently threading, and threading, and threading.  It is a simple point threading on eleven shafts alternating gold with black.  And I really do like threading it's just that one thing after another seems to interrupt progress and getting back into the groove takes a bit more time than it should.  Sigh.

Tonight I took off, though, and went to the Utah Symphony concert. Wowzer!  First I went to the pre-concert talk which featured Eric Owens, bass extraordinaire.  His speaking voice was like dark chocolate covered caramel, rich and deep and wonderful.  He could read the telephone book aloud and I would hang on every syllable.  I was actually sorry when it was time to stop so the concert could begin.

There was only one piece on the program, something I had never heard before: Berlioz's Romeo et Juliette, Dramatic Symphony.  It isn't an opera or an oratorio or cantata, but it has three choruses, and three soloists: mezzo soprano, tenor and bass.  Our mezzo  (excellent) was Tamara Mumfod, our tenor (who had very little to sing but sang well) James Slayden and the bass was Eric Owens.

Three choruses, you ask?  Yes, one is very big and sings mostly toward the end, one is a small chorus that sings early and late and the third is one that sings off stage to reperesent revelers at a party at the Capulets' home.  The only singer who is actually a character from the play is Friar Laurence, sung nobly and well by Owens.  The mezzo and tenor provide commentary about what it happening.  It is all sung in French (with super titles in English) and to my ear the French has absolutely the perfect sound for the music.

The orchestral parts (most of the piece) were luscious and rich and wonderful.  I learned that it was believed that dreams and falling in love were the gifts of Queen Mab, queen of the fairies, because Romeo is teased by his friends about his lovesickness and told he has been hanging out with Queen Mab.  There is a section of orchestral music devoted to Queen Mab which is light, delicate, and almost twinkling.  It is a credit to the orchestra that the same musicians who could play that could also create a very full-bodied powerful sound only a little later in the piece.  It was all so well done!

There is nothing subtle about Berlioz, but sometimes that is just right.  I wish that Harold in Italy would show up on the program one of these days.  It requires a viola soloist (the voice of the heroic Harold) and I'd like that.  A lot....

I voted, did you?

I voted today.  I spent extra time with the information booklet so I would understand for sure what the propositions would do if passed and read through all the infomation on the judges whom we either confirm or say no to.  (I made a cheat sheet to take with me, just to be sure I did it as I had decided.)

I had a friend once who was complaining about something the government was doing and I stopped him by saying, "Rick are you registered to vote?"  "Well, no....(here followed a long excuse)"  "I don't want to hear any more complaints from you until you are registered and vote.  No votee, no bitchee!"  (Forgive the language.)

Having said all that I am not listening to the radio or watching TV tonight;  I can read about it in the morning paper and spare myself the "color commentary" when nothing is really happening.  And, if it doesn't go the way I hoped--and voted--I can complain!

The warping of the radio grill cloth is almost finished.  I have some warp sections still on the drums but will deal with them in the morning when I am fresher.  I can hardly wait to start threading.
Posted by Sharon at 7:58 PM No comments: