Tonight I am going to a celebration of a wedding so I switched my ticket to the Utah Symphony to last night and am I glad I did!  We had a guest conductor ( Mario Venago, Swiss) who began the concert with a lesser-known Sibelius (part of the Kalevalaz) and the well-known Finlandia.  It is no wonder that the latter piece caused the Finns to rise up against Tsar Alexander I!  It's very rousing stuff.

Rhapsody on a Therme of Paganini (Rachmaninoff) was next, played by Conrad Tao.  Tao is just 16 years old, something that wasn't at all evident in his poised manner and wonderful playing.  It is wonderful when the music is played and not just the notes.  When the familiar melody arrived I could almost hear the audience sigh; it was beautiful!  The only thing that revealed Tao's age was the way he left and entered the stage, almost scampering.  The stage was very full of musicians so getting on and off was not easy for him or the conductor.

When he finished the audience leapt to its collective feet and practically cheered!  There were so many 'curtain calls'--no curtains on the stage of course--that Tao settled down to give us an encore.  He played the Russian Dance from Stravinski's Petruschka which to me sounded devilishly difficult and he did it well.

It is so nice to hear such a talented person who is so young.  I hope we will hear Mr. Tao many, many times in years to come.

Schuman's Symphony No. 4 finished out the concert and was played very well.  The details (returning motifs, etc.) were very clear.  The Rachmaninof was a hard act to follow!

Today I started weaving the white silk scarf.  There are about 700 ends in it and as I went along I noticed something that looked "off" and sure, enough there were four threads missing in a repeat.  I cut off what I had woven (I think the warp was too long so there is no harm in it) and started re-threading.  From what I had woven, I will change the sett just a little because it was pretty crowded, so it is all to the good although disappointing.

Therefore I have no weaving photos to show but I have been so enchanted by the Swiss chard in my vegetable garden, besides being nourished by it, that I took a photo of some just because of the colors.  The veins in the deep green leaves, depending on the individual plant, range from almost blue red, through a yellow red, orange, yellow to white.  It's a good thing I like Swiss chard because this seems to have been its year.  Here's a look: 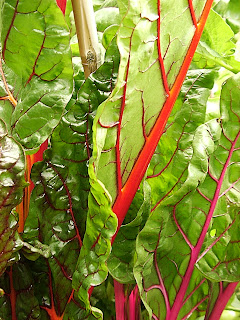 The colors are so saturated and rich. Do you sometimes feel, looking at a color or a combination of colors that you would like to eat what you are seeing?  It happens to me a lot and this time I have been eating these colors quite a lot.

I wouldn't be at all surprised that a cloth will come out of this!

Time to dress for the party!  It is the son of a friend and his bride we are celebrating tonight and I love what I see in the two of them together.  So here's to the beginning of a new family!
Posted by Sharon at 5:30 PM