As I expected, I finished the new towels yesterday, but before I could photograph them (there were 15 plus one square napkin) I got a call from a friend who works at the gallery that represents me and frames my work there.  She was leaving for a family reunion and wondered if I had any towels because she would like to buy a couple to give as gifts.

Did I have towels?  Oh, my, yes!  So I gathered all of them up and took them to show.  Other folks there got into the act and by the time I left, there were fewer than before.  That was such good news and such a well-timed call.

The towels that I have from this series are shown in this photo: 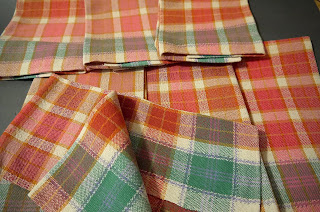 They are very cheery, I think.

I went on from there to cross eight errands off my to-do list.  I love it when I can run several errands in one, choreographed trip!  Eight is a new personal record.

When I got home, I had barely come in the door when I got a call from the scheduler for my knee surgeon who told me that my doctor will be otherwise occupied on October 10th.  I had a choice, he told me, of a later date in October or the single opening in September, the 26th.  I chose the 26th.  The pain in my knee grows every day; it could be that there were residual effects from the last series of injections into the knee capsule that are now wearing off.  On Monday I must stop taking anti-inflammatory medications so it will be a trying week.

I am very relieved that I can get this new knee sooner but it does mean that the generous two weeks I thought I had have turned into one.  I have several pre-op tests to go through and a couple of them are scheduled for tomorrow morning, first thing.  Then I will pick up a prescription at Costco and the handicapped sign that I will use for closer parking after the surgery at the Dept. of Motor Vehicles.  And so another day drains away and it hasn't begun yet.

By the way I am reading a book that is written in an interesting way as a first person narrative called The Reluctant Fundamentalist.  It was recommended by my friend, Teri Jo.  From here on out, I will solicit recommendations from Teri because this one is a winner.  I suspect it will be getting painful in a few pages though....
Posted by Sharon at 7:15 PM

So sorry you need the surgery, but glad that it will be done soon. And maybe weaving will be good therapy? :) Best wishes to you for a speedy recovery.
cheers,
Laura

Thanks, Laura. Tomorrow I am having blood drawn and an echo-cardiogram, both in preparation for the 26th.

I am expecting to recover quickly. I know the importance of doing what the physical therapists tell me to do and I will do it all Everyone who has had a total knee replacement tells me that the reduction in pain makes it all worthwhile. I look forward to that part of it very, very much!