It seems that when things are moving along, something comes up.  I fought the respiratory illness for close to two weeks and had, piecemeal, measured out the warp for the tartan.  I got it beamed and then sighed with pleasure.  I really enjoy and look forward to the threading process.  For me, it is almost a meditation.
But to thread the AVL on which I had beamed the tartan warp, I have to take it apart enough so that I can put my threading bench (Thanks, Jim Hocket!) inside.  And that is where the "something" showed up.  To pivot the bench to make room for sitting, the carriage bolts that fasten the bottom of the bench supports so that the bench can be rotated from roughly horizontal to vertical must be removed.
The carriage bolt had rounded the hole on the right side so that I could not loosen it to remove it.  No matter what I did, the bolt just turned.  Hmmm.
I decided that if I could score the rounded head to make it more like a slot-head screw, perhaps I could gain purchse on it and unfasten it.  I made a trip to buy files and worked on that for nearly a day.  No good.  I couldn't make a nice, snug slot nor could I hold the bolt still with any screwdriver I own to unfasten it.
The next day I decided that I needed to cut it off.  I had to buy a new hacksaw that would fit into the space and a stouter blade.  I sawed and sawed, turned the bolt a little, sawed more and repeated that all the way around until I had cut through the nut and into the bolt a little.  You can imagine my relief when I was able to remove the nut and then the bolt!

By then it was time for me to stop and prepare for the lectures and the workshop I am to present this week in Portland, OR.  The sorting process, as usual, took almost the entire day today but the bag is packed full to bursting and ready to go.

This evening I have rewarded myself by getting into the loom and starting to thread: 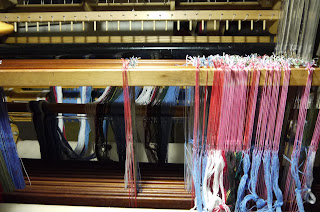 You will recognize the colors from the photo of the tartan sample I showed you a few days ago.
I had hoped to be this far along almost two weeks ago but sometimes life interferes with the best of plans!
﻿
Posted by Sharon at 8:02 PM

I know how you feel - I was unable to weave for almost 3 weeks due to the bug - no energy, and no ability to concentrate on a multiple-shuttle weave. I hope you're feeling more like yourself now! Safe trip to Portland...