The new piece is underway at last.  I have started before but discovered a sleying error, re-sleyed, discovered another and another.  Has that ever happened to you?  It has rarely happened to me but I am aware that my vision changes aren't helping me at all.

But now the piece is underway.  The lamp I use that has been clamped to that loom for years finally stopped being its dependable self.  I bought another at Home Depot this morning, discovered this afternoon that it wouldn't work on the loom, took it back later this afternoon and bought one at Loew's that does.  Home Depot had only two, one of which used a  little 25 watt bulb (too dim!) and I found that there were only two at Loew's, this one and another 25 watt number.  At least this one works and clamps onto the loom satisfactorily.

I was determined not to go to bed until weaving was successfully underway.  (I spent all of yesterday morning in my dentist's chair while he worked on preparing the tooth for a crown.  My mouth is still sore from all of that only having quietened down from the root canal the day before yesterday.  Sigh.)  Now I can take some Advil and go to bed, but not before showing you this: 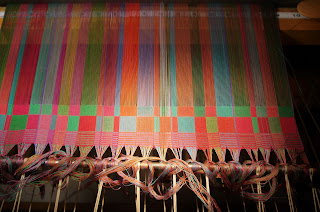 The light isn't quite right in this shot and makes the colors look a bit washed out.  A second, closer look shows the intensity of the colors: 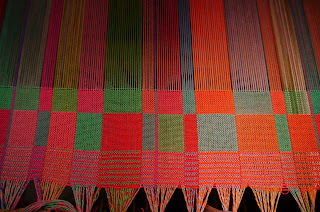 That is beautiful. Sleying errors? Not me.(ha) Looks like it will be fun. Can't wait to see the finished product.