Here we are, between Christmas and New Year's Day, sort of a no man's land of the calendar.  There was a time when I set aside this week to work on things that I wanted to do, not things I needed to do.  This year I seem to be doing it again.

I worked on Christmas Eve Day on tidying up and cleaning.  It wasn't enough to undo all the damage done by inattention to anything other than commissioned work, but it made a difference and cheered me a lot.

I have returned to weaving now because I made the silk scarf warp long enough for two--it hardly pays to make a warp only long enough for a single scarf.  It is well under way now, again all silk and using the same weft but it is being woven in a different interlacement which repeats in 864 picks. 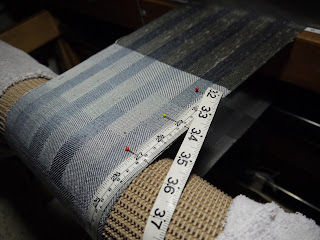 Yes, it looks similar to the one I wove before Christmas which considering that the threading and the yarns are all the same isn't surprising, but it is different, a fact that will be more apparent when it is taken from the loom.

Meanwhile, today a cold rain began to fall a little before noon following strong winds first thing this morning.  That pattern continued until about 4:30 this afternoon when the wind grew wild and started blowing the falling snow horizontally as it grew colder and colder.  Tonight it is still again with a smooth layer of snow over everything.  Up in the mountains, though, the snow fell thick and fast.  Before this storm there were 105 inches of snow at Alta, one of the older ski resorts in the Wasatch mountains that frame my city.  In fact the ski resorts closed early sending skiers down the hill--unless they were staying the night--because the roads were becoming impassable and avalanche danger was growing. 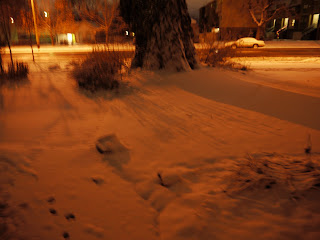 This was the view from my porch a few minutes ago.  The snow isn't very deep, except where the wind piled it up, only 5 or 6" but now the deep cold is setting in.

Salt Lake City throws a big party to celebrate the end of one year and the start of the next.  These days it runs for three nights and is called 3VE (pronounced eev).  Tonight was the first night and by the last night (12/31) the temperature at midnight is predicted to be +3 Farenheit. (For those who use Celsius, that's about -16.)  I have been to colder places (Fairbanks in January 1989 where it got to -80 F), but +3 will do nicely.

I am grateful to have a roof that doesn't leak and an efficient furnace that works!  I hope you are also warm and dry.