I finished the scarf and the souvenir in which I experimented with some variations today.  First I filled a metal pail with very hot water and a little hand dishwashing detergent and took it outside.  I gently set the souvenir on the surface of the water and then set the folded scarf on that.

I was pretty sure that this yarn would track if I washed it by moving it in the sudsy water so I allowed it to wet (hence the detergent) in hot water with no movement at all.  I left the pail of water outside where it was very cold today (in the teens, Farenheit) so that the water would cool completely rather quickly.  I left it out there until late this afternoon when the water was stone cold.  I brought the pail inside, emptied the water, added warn water and a little detergent and washed the fine wool cloth by hand, working it in the water.  Two rinses with a little white vinegar in the second one later is was done.

I allowed the wet cloth to drip dry and then pressed it on both sides until it was dry.  I found out that the press was too hot because I scorched the scarf in one place.  I'll bet you can't imagine how dismayed I was because it took a long time to weave using two shuttles and very fine wool!

Some years ago a woman in my weavers guild who with her husband had a dry cleaning shop told me when I scorched some white wool that sponging it with hyrdrogen peroxide (the kind you buy in the first aid section of a drug store) can remove scorching in wool.  So I put some on a clean, white cotton cloth and gently sponged my scorched wool.  I was concerned that I might bleach the colors but considering the obviousness of the scorch--what did I have to lose?  IT WORKED!

Of course I had turned down the temperature on the press before I finished the pressing.  It has a lovely hand, and is soft and light.  I got out my camera and set to work. 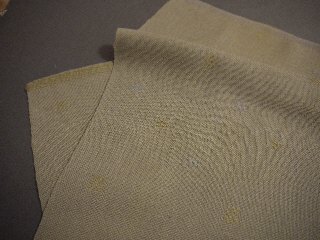 Here is the scarf showing both ends so that you can see that on one side the hem (where I wove separate layers, turned the raw edges to the inside and stitched the two folds together invisibly) is light olive green and on the other the light, silvery gray. 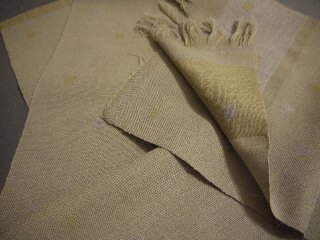 Here you can see the souvenir piece lying on top of the scarf.  The turned back corner shows the olive green side with gray squares which reverses on the other side.  After a little plain weave I wove another piece like the scarf but without spacing the doubleweave squares as I did in the scarf.  I like both variations but am glad I wove the scarf as I did.
If you click on the photos you get a closer look.
So, there you have it!﻿
Posted by Sharon at 9:37 PM